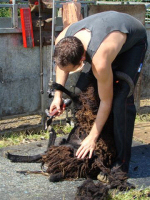 Kings Manor Farm (formerly known as Freshwater Farm and listed in Domesday Book) has been run since 1994 by Jamie and Susie Sheldon as a mixed arable and livestock farm.  The estate's farming activities completely surround the saltwater tidal River Yar estuary.  As a consequence it provides one of the most exciting environmental habitats in southern England with an extraordinary range of biodiversity.  The estuary is particularly renowned as being a haven for Lapwing, Teal, Widgeon, Curlew, Whimbrel, Redshank, Shelduck, Shoveller, Water Rail, Egret, Merganser and Kingfisher.  The family has preserved the estuary in its natural state for 40 years, treating the tidal area as a wildlife sanctuary.  The farm is registered as organic with the Soil Association

The family take the view that only a mixed farm, having both livestock and arable activities integrated, can provide an extensively run sustainable farming operation which can be completely sympathetic with the management and conservation of this uniquely biodiverse estate.

Kings Manor Farm has been identified as one of the most exciting environmental schemes on the south coast of England and recently won the Wessex Grey Partridge Award from the Game Conservancy Trust.   The farm entered Countryside Stewardship in 2002, the Woodland Jigsaw Scheme in 2003, Game Conservancy Grey Partridge Count in 2004, Higher Level Stewardship in 2006).  Substantial planting of both trees and hedgerows has taken place outside these schemes.

The team have been with the farm for many years (Peter Warr has worked for the family for 60 years!) and are committed to the upkeep of the estate.  It is a credit to their dedication that our crops are in such wonderful condition.